Looking Back From Here

UCB has been on a long, and at times, difficult journey.  From 1986 when we first started broadcasting regionally, to 1994 when we started sharing God’s Word through the UCB Word for Today, and to 2009 when we were granted our first national DAB radio licence.  There’s been many more developments along the way of sharing God’s Word throughout our nation – so we’ll start at the very beginning: 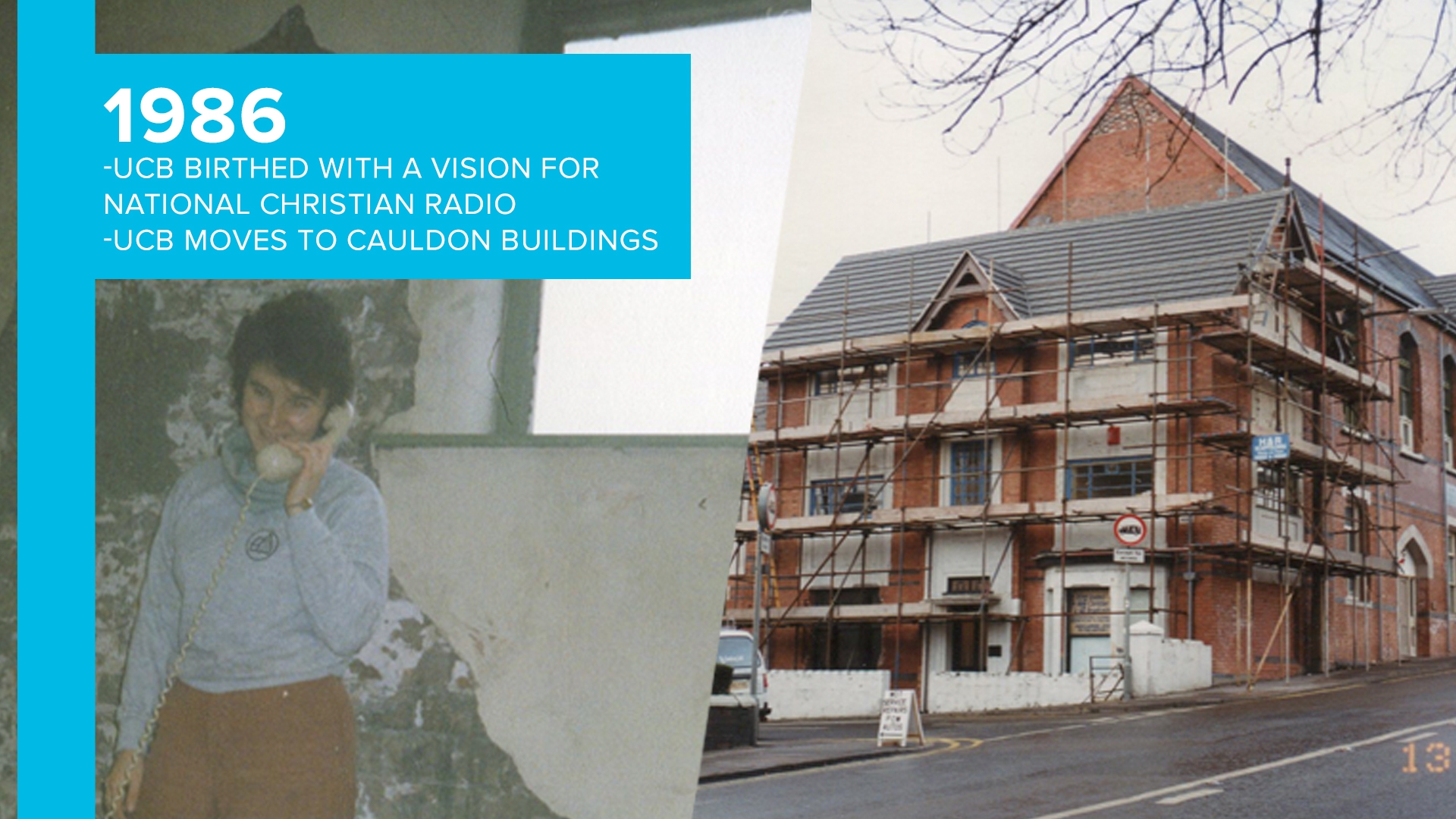 The origins of Christian broadcasting in the United Kingdom can be traced to the southern hemisphere. In 1961, while fitting an aerial to receive Ecuador’s HCJB (a gospel project dating back to the 1930s), Richard Berry sustained a back injury that led him to divine healing and a determination to establish Christian radio in his native New Zealand. Independent broadcasting was not allowed, and it took until 1978 for Radio Rhema to obtain a full license.

Ian Mackie, a British ex-patriate engineer who had encountered Jesus in New Zealand and began to work at Rhema, felt called to return to the UK and bring Christian radio with him. He arrived with his family in October 1986, ahead of a notorious winter during which the sea at Southend froze. The situation was as bleak as the weather, and in all his meetings with the right people, Ian got nowhere.

God’s Word for the United Kingdom

When he might have given up and gone home, Ian heard from God. Despite the prohibitions of government and the public’s lack of appetite for Christian radio, it was going to happen. “They don’t want it,” God told Ian, “But I want it. I love the people of the UK and I’m going to visit them in revival power. Churches will struggle to cope and there won’t be enough house groups for all the new believers. I want Christian radio to be there covering the whole nation so that when these new believers lose their peace, when they have doubts, whether it be three in the morning or three in the afternoon, they’ll be able to switch on the radio, hear my word, and find encouragement.”

With the notion of Christian radio in the UK both legally prohibited and practically impossible, United Christian Broadcasters (the name Ian had brought with him from New Zealand and Rhema) headed for the Isle of Man where they signed a three-year contract with Manx Radio to broadcast 10 till 2 every night while the island’s national station was off-air. It wasn’t much but it meant a lot to the small numbers in north Wales, Cumbria, western Scotland, and County Down who were able to tune in. Just a few minutes away from the studio in Victoria Road Prison, a man was converted while listening in his cell. 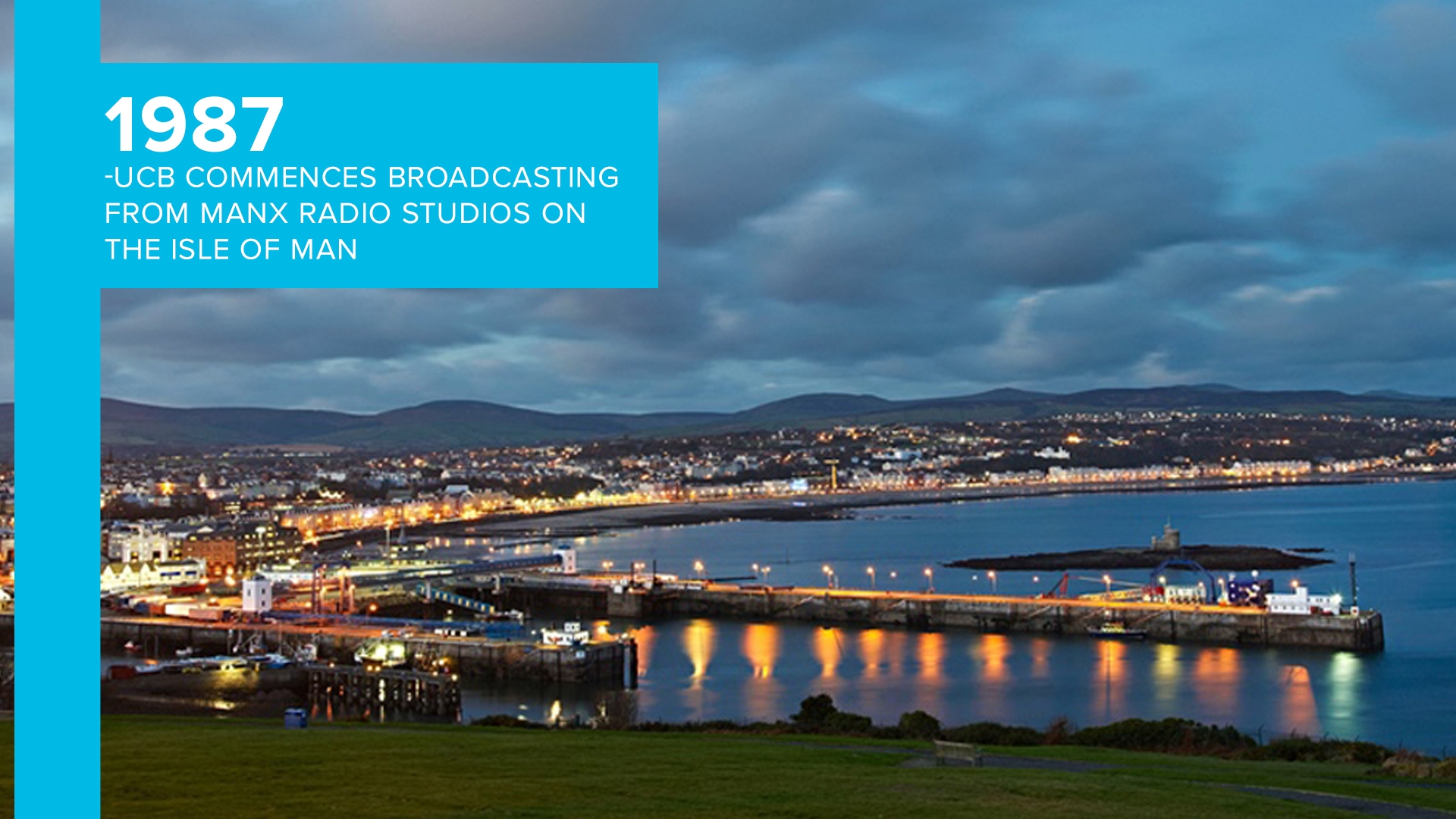 Ian’s early colleague Gareth Littler (who had worked in satellite technology prior to joining UCB in 1987) successfully lobbied for changes in broadcasting laws. UCB managed to get the message out on Clyde Cable from 1990 and the following year began to secure local 28-day FM licences in the Midlands, broadcasting from our former warehouse premises in Stoke-on-Trent, donated by William and Helen Brooks.

FM was until very recently the major league for radio in the UK, but finding it closed to us at the national level we looked for other opportunities. Our main station, UCB Europe, was broadcast on Astra Satellite, and for a while on medium wave from huge, Communist-built transmitters in Russia. Much of this progress was affordable thanks to an offer by Belfast-born American pastor Bob Gass to write a daily devotional, which helped create a supporter base for UCB. 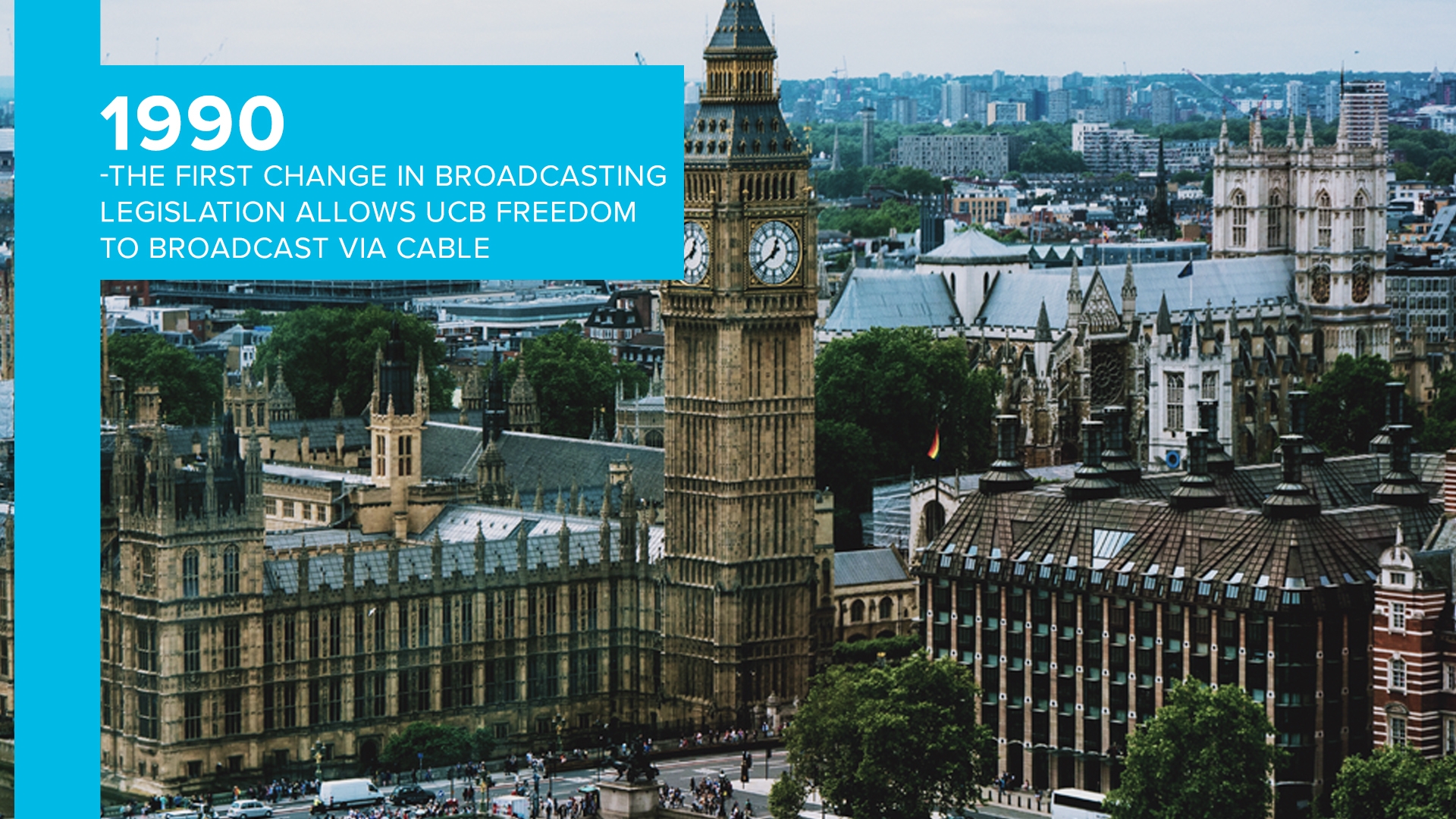 The big breakthrough occurred with digital audio broadcasting (DAB) and the 2003 Broadcasting Act, which was open to Christian radio and to which UCB responded immediately. Still, patience and faith were required as ever, and it was six years before UCB UK began broadcasting nationally on DAB. Today digital is the leading platform for radio, surpassing FM in listenership.

During those broadcasting struggles, UCB branched out very successfully into publishing and began a telephone helpline. The UCB Word for Today was launched in the spring of 1994, distributed free-of-charge to more than three thousand supporters, while the Listening Line began to take calls the following year before evolving into the UCB Prayerline in 2004. Demand for both has increased massively, with subscriptions and prayer requests climbing into the hundreds of thousands each year. 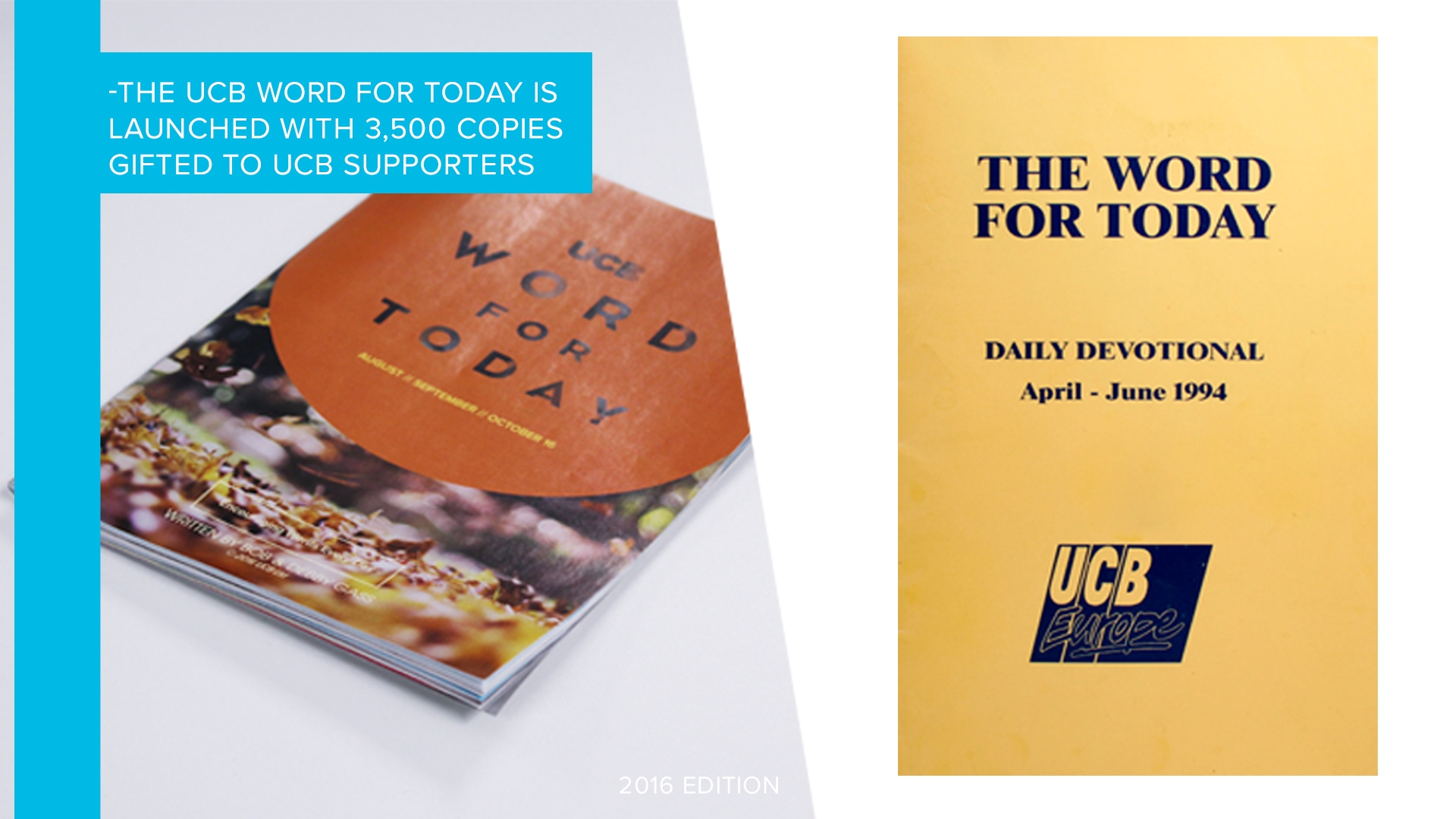 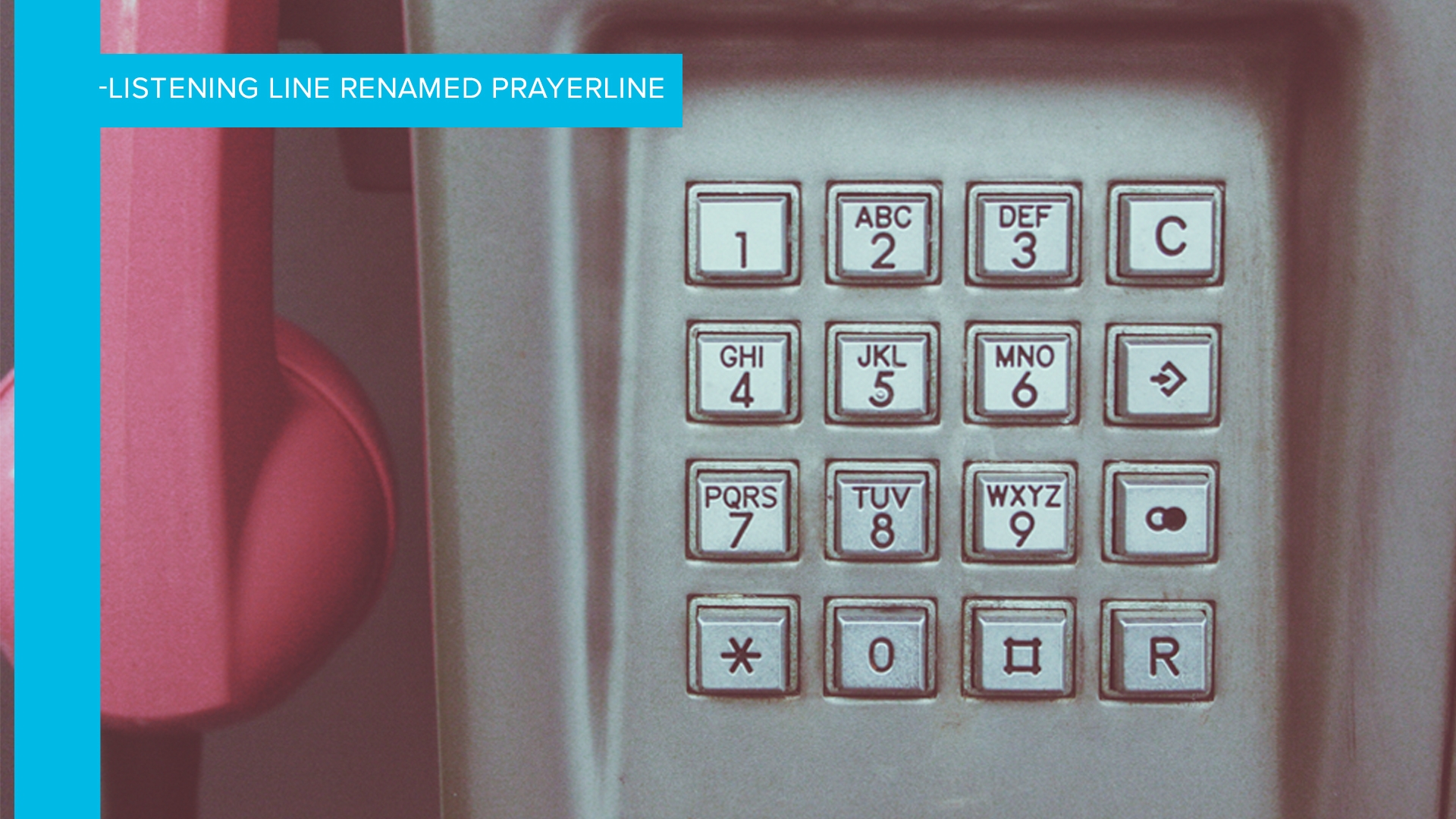 We are called to be...FOCUSED, INTENTIONAL and TIMELY in all that we do at UCB.

Our goal is still to reach the lost and to see lives changed by the power of God’s Word. UCB is an opportunity for Christians to come together and make the truth heard. Through God’s provision and in partnership with our supporters, the good news of Jesus is being received across the nation. We’re excited you’re joining us in that.